I thought whilst I was on a 90’s theme of films I would keep it going until I see some new films in cinema. So with that in mind here is one film of Stallone’s that I really have a lot of fun watching, not because of it being good but because of its fantastically funny satire and character relationships between its main cast. I have a sneaking suspicion that this film is why Stallone was picked for the Judge Dredd role, not a good choice to make really as they went so similar but tried with the Dredd material and they don’t mix well. Either way by the end of the film you’ll be asking yourself ‘would I eat a rat burger?’

The plot of this action film begins in 1996, with Los Angeles in a violence-crazed conflagration. One of the LAPD’s most notorious cops, John Spartan (Sylvester Stallone), known as “the demolition man,” is in hot pursuit of blonde-haired psychopath Simon Phoenix (Wesley Snipes), who is so nasty he even kills sometimes just because he feels cranky. John captures Simon, but not before Simon kills innocent hostages. John is blamed for the deaths of the hostages, and both he and Simon are cryogenically frozen to remove their brand of ultra-violence from a society that is simply just too violent. The film shifts to the future world of 2032, where Los Angeles has become a megalopolis called San Angeles. There is no poverty, Arnold Schwarzenegger was (at one time) president of the United States, and Taco Bell is the sole survivor of the Franchise Wars. Into this peaceful and bland society, Simon is summarily defrosted by reigning benevolent dictator Dr. Cocteau (Nigel Hawthorne) to have Simon murder Edgar Friendly (Denis Leary), the leader of a group of underground rebels. But Cocteau bites off more than he can chew when the melted-down Simon proceeds to go on a murder-and-looting spree. Reluctantly, Cocteau defrosts John to hunt down his old adversary. As John adjusts to self-driving cars and having sex wearing helmets, he pairs up with Lenina Huxley (Sandra Bullock), a bored cop with a nostalgic fascination for 20th-century culture. 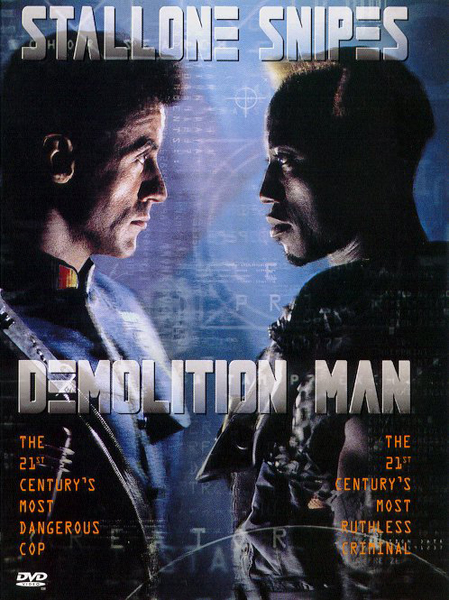 To start off let’s talk about the acting. Most of the people in this I think get what this film is; the main role was made for Stallone as a relic from the 20th century. I like the idea of a utopian future that is so sterile and boring that people don’t eat meat or say anything obscene (two things I would sorely miss). Wesley snipes does a great job as a psychopath criminal who thrives on chaos and destruction, and with this future he gets plenty of chase to do both without a soul to stand in his way. The rest of the cast don’t quite get as much screen time but still deliver fantastically funny lines. Sandra Bullock does really well as a comedic relief with lines that she confuses from old movies and police reports, my favourite ones are “Let’s blow them” and “You really licked his ass”. 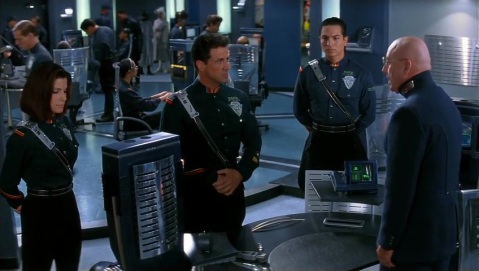 So now let’s talk about the visuals. The special effects in this film were pretty good and I liked the props used for futuristic stuff like the cars and glow stick things, either make you laugh or go hang on a minute I think my neighbour just bought one of those. The moment that made me laugh was when they said all kinds of stupid future mannerisms that probably would be said if you lived in their utopian society, but Spartan getting fined every five minutes for swearing made this film fun as hell. Now let’s talk about the action scenes. The action scenes were very well laid out and for the most part very fluent with great fun chases and gun fights that seem to be very extreme at time but I prefer my gun fights that way, super explosive at times. Some of the best parts of this film are the character interactions between Spartan and Phoenix because it was such a typical good guy meets bad guy scenes which I miss from films now.

The best reviews I found would be “This futuristic comedy depends on your opinion of Stallone and his unapologetic popcorn-pleasing action no-brainers. To be fair, this one is one of his better ones.” Phillipa Bloom. This is easily one of Stallone’s best roles purely for the fun he has with it, but I also liked this review “The pleasant surprise about Demolition Man is that both the script, and Stallone, are funny; the film blends big-budget action and tongue-in-cheek humour in the way that Last Action Hero tried, and failed, to do.” The Movie Guide. I actually laugh at the last action hero as well but they are both funny with this one having more laughs out of satire of our future society. My favourite scene would have to be the scene where Spartan needs toilet paper and just goes up to the machine that issues out tickets when you swear and rattles off a line of obscenities.

Finally this Line from Denis Leary could be the best line ever!