This is my list of the most anticipated films released in the year 2014, wow this year, crept up quick. I have a skewed view towards the genres of Sci-fi and Action, so don’t expect indie or drama, I will watch them but at the moment I just don’t care. If you notice any films that you want to see more than anything then this could mean one of two things, either I disagree or I simply forgot it was coming out. If so I would love to know if I am missing any. Also there will be a box office prediction for each film; you guys know how much I like predictions. Upcoming reviews are all 2013 film, first Frozen then The Kings of Summer and You’re Next is ironically next.

I liked the first film but it wasn’t anything special and the sequel sounded interesting especially with that title (that’s right I read comics) Bucky! Gone to the dark side (sad face). But wow the trailer makes the film look great and I don’t really know that much more than I did before the trailer, which is good (few spoilers). The scope of the film looks pretty massive and after the Avengers that is really needed, whether this scale will help or hinder is too hard to tell but me like. Also listen out for that music because I think it’s part of the films score and its pretty good, its different than most of the marvel cinematic scores.

I would place this much higher if I had more to go on, however we have next to no information past a vague synapsis and a very brief trailer. Granted the trailer had some cool atmosphere and that intro is glorious but again nothing to on other than it contains some cool actors and GODZILLA!!! 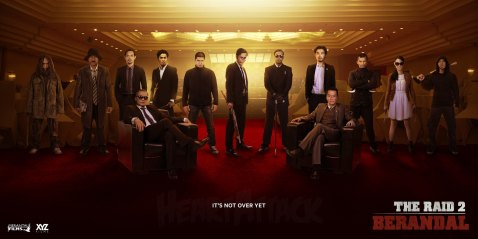 I absolutely loved the first film, so bloody and raw. If the sequel expands on that by going outside of a tower building it should hopefully be amazing. The film could falter but I am purely optimistic about it and eagerly awaiting its explosive entry into cinemas.

The first film was such a fantastic surprise as a comedy and the trailer puts my doubts to rest for the most part about a sequel. I mainly say that this doesn’t bother me because in the trailer they just don’t stop mocking the idea of this being a sequel. Ice Cube gets more time which is great and the duo seem to have hit their stride in the characters Jenko & Schmidt. I am definitely going to see and I hope you all see it too.

How did they reboot Planet of the Apes in a serious way? Seriously the first film was great and this looks like my jam! Dystopian future, ape armies, dawns, Gary Oldman. We get the basic plot with no spoilers so I say this teaser trailer is fantastic. Bring on the film!

#5:  Guardians of the Galaxy

Got nothing for this! This is the most out there on the list and it could end the best film ever made, the worst film ever made or just average. But the anticipation is killing me for some reason. I have it in my head that it will be star wars set in the marvel universe. Come on trailer

This is another film that I loved and am praying the sequel is equally good. The first was great and one of my favourite animated films of past 10 years. Loved the teaser trailer they released as well, but I love full length ones better. Didn’t really know where they’d take this sequel but the introduction of Hiccup’s mother and a new Viking threat has my attention. I am hoping for some epic fun from the DreamWorks team.

Second film really impressed me and even made it to second place on my top ten films list of 2013, so of course the next film is highly anticipated. Now then the next book is a darker subject matter, you know full on revolutions get a little messy. Not sure how they will do it but I am excited to find out.

It’s looking very interesting and whilst I have no idea what the final product will deliver I am very interested in this film. Watched the trailer a few times now and my only thought is wow Sony is REALLY going for it! Insane amount of content in this film and there is a lot of stuff I like, and the usual worries I get. We see Rhino, Electro, Green Goblin or Hob Goblin? And easily my favourite scene showing the super tech for the sinister six. Sinister Six!

#1:  The Hobbit: There and Back Again

Like the The Hunger Games 2013 brought another great sequel, I hope this last film finishes strong enough to be worthy of the last middle earth film. The part 2 left things hanging and if the part 3 is done correctly it will be amazing but if they drop the ball it will be an unmitigated disaster. Optimism!!!

Tags: 10 most anticipated films, 10 Most Anticipated Films of 2014, 2014, 22 Jump Street, best films of the year, box office, Captain America The Winter Soldier, Dawn of the Planet of the Apes, Godzilla, Guardians of the Galaxy, How To Train Your Dragon 2, Predictions, Review, The Amazing Spider-Man 2, The Hobbit: There and Back Again, The Hunger Games: Mockingjay – Part 1, The Raid 2: Berandal