Plenty of my readers know that I love a good box office prediction, and so what’s better than to predict who will win the most tightly contested season the summer, well nothing really. 2014 has a very mixed summer filled with all kinds of films; this will mean very different numbers and makes predicting them quite difficult. Normally it’s easy to see how well a sequel will make but this summer we have 3 franchises alone that have been rebooted and in their own right having sequels. That being said below is my 10 favourites to win the summer box office, not which I think will be good or that I want to win just that they will bring in the green (or whatever colour money is in your respective countries). Think I am wrong or just want to join in? Then post your 10 favourites to win in the comments section below.

Hardly one of the Billion busters later on in the list but it does have the potential to be a popular comedy and they can bring in some big numbers. Now don’t get me wrong it won’t be a ‘Hangover’ level of money making but look for an equal number to ‘This Is The End’. The film has been getting brilliant reviews and great early word of mouth so it may not start super high but it will most likely have legs for at least a month.

This one will be another popular comedy but after the success of the first film I think it will be getting an impressive bump for the sequel. However comedies won’t get the blockbuster bump even at the best of times so let’s keep it modest, something I doubt the film will do (Ha). The stars have only gotten bigger, the people who only saw it on DVD last time know what they’re going into and marketing has been good.

I am unsure about this one as a film, but as a box office draw I am sure it will do well. These films surprisingly don’t fail often at the box office and in the past few years it’s been hard to get them to bomb. If Hansel and Gretel can make $200M then this should have no problem at all surpassing that. Angelina Jolie is having a blast, the visuals are strong and the story will in a modest way bring back some nostalgia for the original Disney animated adaptation.

#7:  Guardians of the Galaxy

Ah yes the leader of the wild cards. This film could go any which way but I will break down my theory. Marvel and comic fans make up at least $50M. Sci Fi Adventure fans make up another $100M. And the big one is entirely up for debate, the last marvel film before The Avenger 2. It could make anything but here is my very changeable prediction.

This film could go one of two ways. It’s really good and word of mouth is ridiculously good, in which case it will make how much I say or more. Or it’s mediocre to bad and the film quickly becomes a flop if not a disastrous one. I however believe they are doing the film right, it feels like a horror film that features Godzilla and I cannot wait. Look for good US numbers and monstrously high numbers overseas if it is good. Bring on the king of monsters!

So this film is I think the third reboot of the apes franchise and it is also a sequel to 2012’s surprising hit. It is a hard one to measure but as a pure sequel am going for increased returns on the sequel effect. However it has something else going for it, the story has gotten real interesting. The apes aren’t just getting their origin they are now taking over after years of a deadly disease knocking the humans down a peg or two. HUMANS VS APES!

This film’s hype is at 200%, which would be great if the general public felt the same way and I don’t think they do. General nerds and film obsessives are super hyped but suddenly drops as you venture out of that small bubble. So don’t think this will be Fox’s Avengers superhero team up but it will be the biggest box office hit of the X-Men franchise. But how much more will it make. The biggest hit was X-Men 3 (THE PAIN!) coming in at about $400M. The new team set up in X-Men First Class made about $300M. Am just going to combine them, not because I think the audiences are different because they are not but I think together the numbers make up for the new story, the massive cast, the rising star power of some of the cast and the massive advertising campaign. 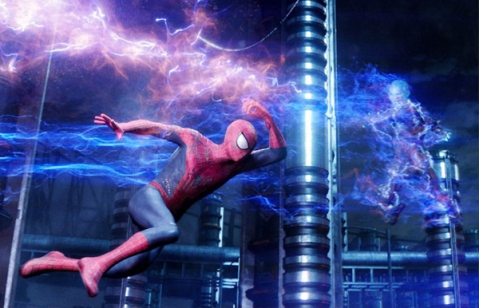 Starting off the summer season never hurts, and Spider-Man films never lose money they make money. The problem is that the last film was the lowest grossing of the series. However in the sequel they have tried the time tested rule of going bigger to make more money, it may be a simple trick but it nearly always works. Multiple and better villains and with more light hearted humour featured in trailers I see a modest bump in its box office earnings.

You may think that being #2 on this list is madness and if my only argument was the popularity of the first film, the strong marketing and general public interest then you’d be right. However what will guarantee the films high grossing position is that it is miles away from the next animated film. It has no competition in the kid’s genre, no Disney, no Pixar. It will destroy the box office. My estimate may seem high but it may turn out be too small.

I don’t care about this film, the only aspect I give a hoot about is the Dino Bots, pretty sure that’s all anyone is going to bat an eye at in this film. However I am just talking about my people, the nerds. But what do the general public think, am not a mind reader but I know that every one of these films has made sickening amounts of money. The first one made over $700M and each one after that no matter how bad made more. I don’t think they will match the last films $1.3B but it will touch the Billion dollar mark with the now very powerful Asian market. Some of this was filmed in China, I wonder why? What motive could they have?

Tags: 2014, 22 Jump Street, Bad Neighbours, box office, Dawn of the Planet of the Apes, Godzilla, Guardians of the Galaxy, How To Train Your Dragon 2, Maleficent, Neighbors, Predictions, Review, Summer Box Office 2014, The Amazing Spider-Man 2, Transformers: Age of Extinction, X-Men: Days Of Future Past