Guardians of the Galaxy (2014) Review

Guardians of the Galaxy might be my favourite film of the year, seen it three times. Marvel has had a brilliant year with creating new genres within the comic book genre. Easily the funniest superhero film ever made but not in a really cheesy way like Thor 2, it was genuinely funny, it was a James Gunn film through and through. The visuals are great, the split between practical effects and CGI are really well done, and the sheer amount of aliens created visually in the film brings you back to star wars. Then we have the cast who are a perfect group for this action adventure film in space, you get them, you’re with them. Well done James knew you could do it.

I’ll go into much more detail below but for now bookmark this if you are waiting to see the film, leave any comments below, if you have seen the film then check out the spoiler sections and I will look forward to hearing everyone’s thoughts.

Rocket: “His people are entirely literal. Metaphors go right over his head.”

Drax: “Nothing goes over my head. My reflexes are excellent and I would catch it.”

Brash adventurer Peter Quill finds himself the object of an unrelenting bounty hunt after stealing a mysterious orb coveted by Ronan, a powerful villain with ambitions that threaten the entire universe. To evade the ever-persistent Ronan, Quill is forced into an uneasy truce with a quartet of disparate misfits-Rocket, a gun-toting raccoon, Groot, a tree-like humanoid, the deadly and enigmatic Gamora and the revenge-driven Drax the Destroyer.

The story isn’t as strong as other superhero films, better than some, but really it doesn’t matter a huge amount. The basic structure of the films story is the same as most of the marvel films. Origin of the main character, some object being the centre of attention a MacGuffin if you will, the main character interacts with the rest of the main characters, they decide to save the day, and then a city gets destroyed. Oh and the villain is just pathetic, not as bad as Malekith but not much better, Yeah marvel needs to sort this out. But as for the rest the story developed to help the characters progress and this clearly worked very well, you laughed you cried.

The acting is good with some pretty emotional scenes involved between Quill and Gamora and unexpectedly between Drax and Rocket, actually the whole cast worked really well together in this film. Five jackasses standing in a circle is a great example of why they work together, they shouldn’t fit in anywhere but being so diverse makes for wonderful character exchanges. The dialogue is near excellent on the comedy side, maybe a little work on the dramatic side but time and place for that. Lee Pace was ok as Ronan but the character himself is weirdly written, it’s the same problem they had with Malekith, they are such two dimensional characters, hell I’d call them one dimensional. Muwhahahaha I’m evil now watch me do evil things with next to know context. 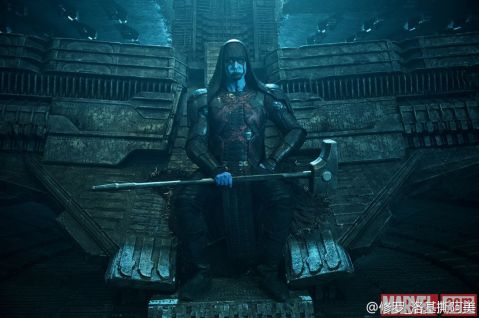 The science fiction of this film is great, when they said the star wars of the marvel universe had me cautious but it really does work. The technology, the aliens, the planets, the space battles and the severed head of a Celestial, that’s some good Sci-Fi. I couldn’t name half the aliens on display and they all looked very different. They also did an unbelievably job of dropping every easter egg they could, with some real outer there nerdy eggs to find.

The visuals in some scenes are stunning, especially in the last big old battle with the massive fights and space battles over Xandar. In the rest of the film the visuals are also stunning; the practical effects on some characters are flawless, like on Nebula, Gamora and Drax. But then you also have two members of the crew who are 100% CGI Rocket and Groot, they looked great and Vin Diesel and Bradley Cooper did really well to voice them. The music was excellent and the way Gunn used it was what made some scenes.

Seriously guys turn away now to avoid spoilers. John C. Reilly wakes up after the scene with his family in the film and cannot believe the insanity of his dream. He never dreamed again. I told you not to read this section, also what did I just write? There is a lot to talk about here so I’ll keep it brief and talk more in the comments. So Peter Quill has a space daddy, a baddy space daddy from the sounds of it, I haven’t got a clue who because it’s not the one from the comics, I’d like some suggestions in the comments. Baby Groot was just a happy moment, loved his dance. The end credit is terrible! Howard the duck really, I hated that.

The best reviews I found would be these:

“Guardians of the Galaxy has a cocky swagger about it, that echoes some of the best films of the 80’s, and features one of the greatest soundtracks ever and is sure to be a contender for the most entertaining films of the year.” What About the Twinkie. Full Review

“Amidst all the clutter of all the goofy actions, there’s actually a bit of emotional touches here and there. So overall this movie proves to be a pleasant surprise and one I don’t even mind watching again. Not as spectacular as people led you to believe, but still worth a look if you’re initially skeptical.” Flix Chatter. Full Review

“There are probably places where you could be picky in the movie. Ronan the Accuser is a fairly generic comic book villain; Karen Gillan’s Nebula is more of a secondary villain but actually is a stronger character and might have benefited from more screen time. However, overall this is one of the most fun movies I have seen so far this year, and it’s my favorite movie of the summer. I’m glad Marvel was willing to take a risk, and I’m already looking forward to the sequel.” Box Office Buzz. Full Review

“Guardians of the Galaxy is a great summer movie with fantastic characters and non-stop action, but it’s not quite the power-house it has been made out to be.” Oracle of Film. Full Review

My favourite scene would have to be well I can’t think of just one. Any part with great music or hilarious comedy then it’s an easy win.