I was extremely critical of Blomkampf after Elysium, and no less so in preparation for this film. However I actually really liked it. He has redeemed himself in part to me anyway. Chappie has a message or two that really work. It’s not about the danger of AI, it’s about how dangerous humanity can be when faced with change. Or how innocence can be corrupted? Its got like five messages floating round. Just pick one and go with it.

I’ll go into more detail below but give it a try, got trailers and images below. Check it all out and give me a like and a comment at the end.

In the near future, crime is patrolled by an oppressive mechanized police force. But now, the people are fighting back. When one police droid, Chappie, is stolen and given new programming, he becomes the first robot with the ability to think and feel for himself. As powerful, destructive forces start to see Chappie as a danger to mankind and order, they will stop at nothing to maintain the status quo and ensure that Chappie is the last of his kind. 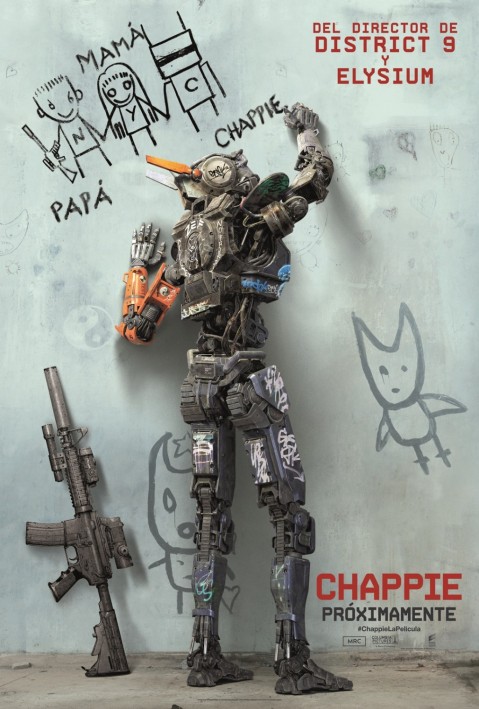 The films pace is excellent, far better than Elysium. For a 2 hour film it did not feel like it. Never lost my attention and I didn’t see any wasted screen time, all relevant. The action is in Blomkamp style spectacular to watch, lots of guns and robot action. Funnily enough I didn’t even know this was a 15 (R), well until the end, it gets really clear at the end. Chappie was a delight and even though he has no real facial expressions to speak of you get every emotion and feeling to understand the character. The film was for the most part quite funny, I laughed a good few times and it lulls you into feeling like this isn’t a dystopian story. The acting was solid and the cast all tried hard, sometimes you get these real lazy performances in big star casts but the crew is pretty solid. Even the musicians turned actors who play Chappies family. Jackman’s character is kind of hard to pin down for most of the film, a villain through and through but he has no doubt he is in the right.

My Favourite scene would have to be either the big battle near the end with Jackman’s bot verses Chappie which was excellent and gave the film the very deserving R rating, or when they are teaching Chappie about knifes trying to trick him into thinking they just put people to sleep (Out of context that sounds evil) but then Chappie starts trying to put them to “sleep”.